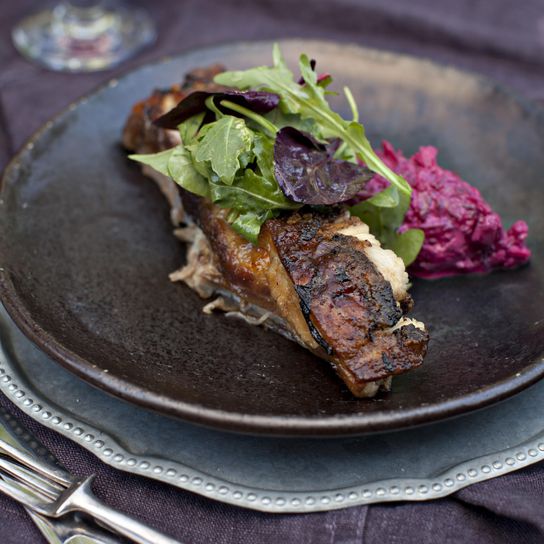 Roast Belly of Pork with Beetroot Tzatziki and Rocket

On every three-month course at the school, we all head off for a trip together. The favoured destination is Paul Flynn's restaurant, The Tannery, in Dungarvan.

On a memorable visit, I asked him to cook a belly of pork. I was also interested to see what sauce he would choose as an accompaniment.  When he had finished and I enquired about the sauce, he pointed at the beetroot tzatziki. "That's it", he said, and if Paul Flynn says that this is a sauce, then this is a sauce.

Place the onion rings in a single layer in the bottom of a roasting tin. Sprinkle over the garlic and half of the sage, then pour in the stock. Sit the pork belly on top, then splash over the cider. Sprinkle over the remaining sage along with the cloves, allspice and cinnamon. Season to taste and cover with foil. Cook for 3 hours, until the pork is completely tender and pulls away from the bone easily. (However, the cooking time could be much longer, maybe 4 hours – judge by the tenderness of the meat.) Baste occasionally during the cooking.

Remove the foil and sprinkle the Demerara sugar on top. Increase the oven temperature to 200°C, 180°Fan, 400°F, Gas 6. Return the pork to the oven for 20 minutes, until it’s glazed and golden. Remove the pork to a warm plate and set aside to rest for at least 20 minutes. The pork may be prepared in advance and reheated with a little stock in the bottom of the roasting pan.

To make the Tzatziki

Place the beetroot in a bowl with the garlic, apple, Greek yoghurt, red wine vinegar, olive oil and horseradish. Season to taste. Mix well to combine, then cover with cling film and chill until needed. This will keep for up to 24 hours.

To serve, place the rocket in a bowl and season to taste, then dress with the olive oil and red wine vinegar. Mix lightly to combine. Carve the rested pork into thick slices. Serve with some of the roasted onion rings, beetroot tzatziki and rocket salad.

For the Beetroot Tzatziki

Do you want one of Lynda’s cookery books? Order now from our shop.

Our gift vouchers are the perfect present for any food lover